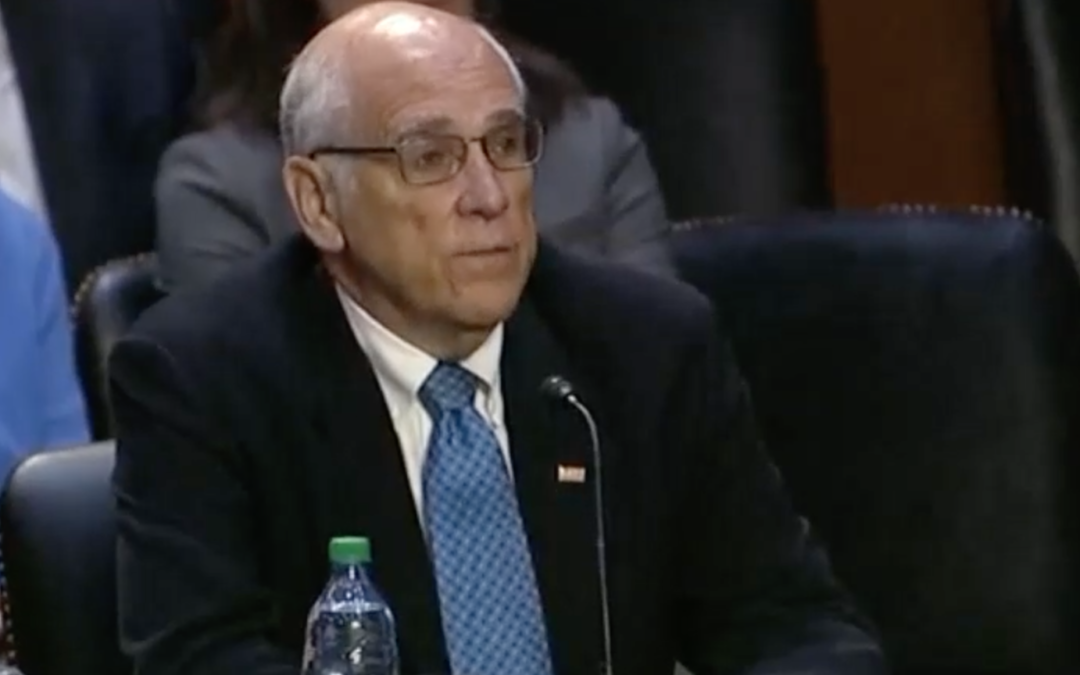 ERA-Abortion Link, Once Denied, Is Now Openly Proclaimed by ERA Backers.WASHINGTON – Backers of the 1972 Equal Rights Amendment (ERA) will begin yet another series of shock-paddle treatments to the long-expired proposal this week, with a hearing on “The Equal Rights Amendment: Achieving Constitutional Equality,” in the U.S. House of Representatives Committee on Oversight and Reform, on Thursday, October 21.

The hearing is the latest act in a long-running magic show, bent on preserving the politically useful illusion that the 1972 ERA is alive and perhaps only a step or two from becoming part of the Constitution. While much of the mainstream media has been happy to amplify this narrative, it becomes tenuous when placed under a modicum of critical scrutiny. In an apparent attempt to limit such skeptical scrutiny, Congresswoman Carolyn Maloney (D-NY), chairwoman of the Oversight and Reform Committee, has scheduled six pro-ERA witnesses but allowed Republicans to call only one ERA-skeptical witness.

ERA-is-alive legal theories have compiled an unbroken record of rejection by federal judges of every political stripe, a losing streak now extending for 40 years. Douglas Johnson, director of the National Right to Life ERA Project and author of a recent article distilling four decades of legal efforts to revive ERA, commented, “Over a 40-year period, 23 federal judges and justices have taken adverse actions on ERA-revival legal claims. The ERA-is-alive legal theories have been scorned by judges of every political background. Not a single judge yet has accepted any element of the ERA-revival legal theories.”

This year alone, the ERA-is-alive movement has suffered two major legal defeats. In his thorough March 5 ruling in Virginia v. Ferrerio, Judge Rudolph Contreras of the federal district court for the District of Columbia ruled that the deadline included by Congress in the Proposing Clause of the 1972 ERA Resolution was constitutional and that legislative actions by Nevada (2017), Illinois (2018), and Virginia (January 2020) were not real ramifications, because they “came too late to count.” The Archivist of the U.S. was justified in refusing to certify (“publish”) the ERA as part of the Constitution, and the claim (made by the attorneys general of Virginia, Nevada, and Illinois) that the Archivist should ignore the deadline was “absurd,” Contreras wrote. Virginia, Nevada, and Illinois have appealed Judge Contreras’ ruling to the U.S. Court of Appeals for the District of Columbia, where it will be argued in 2022 before a three-judge panel, yet to be named, with a ruling perhaps a year away. Five states opposed to the 1972 ERA are also parties in the litigation.

In a separate case, Equal Means Equal v. Ferriero, on June 29 a three-judge panel (with two judges appointed by Democratic presidents) of the U.S. Court of Appeals for the First Circuit unanimously upheld the earlier ruling of another federal district judge, Denise Casper of the District of Massachusetts (appointed by President Obama), dismissing for lack of standing a lawsuit run by the pro-ERA activist group Equal Means Equal. Earlier, the group had asked the Supreme Court to intervene, a request the court turned away without recorded dissent. Despite some continuing legal antics by the group, Equal Means Equal v. Ferriero is effectively dead. However, the head of the Legal Task Force of the ERA Coalition, Linda Coberly, has said there will be a new wave of lawsuits against various government entities starting in late January 2022, based on the legal fantasy that the ERA becomes enforceable at that time (i.e., two years after Virginia’s illusory “ratification” based on ERA’s Section 3).

A congressional joint resolution (H.J.Res.17, S.J. Res. 1) that purports to “remove” the ratification deadline retroactively, seven months after passing the House of Representatives on March 17, 2021, on a near party-line vote, has failed to attract even a single Republican supporter in the U.S. Senate, other than the two Republican senators (Murkowski and Collins) who have supported the measure for years. “The measure would fall well short of the 60 votes necessary to clear the Senate,” said NRLC’s Johnson.

Moreover, the “deadline removal” measure is patently unconstitutional. As Wendy Murphy, attorney for the pro-ERA activist group Equal Means Equal explained during a May 1 “ERA Summit,” “It’s obvious that they [Congress] cannot retroactively remove a deadline.

”Congresswoman Maloney has already urged the Biden Administration to simply order the Archivist to certify the ERA as ratified. But Judge Contreras ruled that the ratification deadline was constitutional and effectual. Moreover, Judge Contreras noted that publication and certification of a constitutional amendment by the Archivist “are formalities with no legal effect.” NRLC’s Johnson commented, “Congresswoman Maloney is urging the Biden Administration to engage in an act that would be both lawless, in the face of Judge Contreras’ strongly worded ruling, and legally ineffectual.

”Moreover, when Merrick Garland was nominated as attorney general, both he and President Biden strongly asserted that there would be no White House interference with the Justice Department on legal matters. Christopher Schroeder, nominated to head the Justice Department’s Office of Legal Counsel (OLC), at his June 23 confirmation hearing before the Senate Judiciary Committee, was asked by Sen. Charles Grassley (R-Iowa) about the Administration’s thinking on the ERA’s status.  Schroeder replied, “I think we will be all best suited if we allow the litigation process to answer that question.

“On February 10, 2020, in remarks at Georgetown University Law Center, the late Justice Ruth Bader Ginsburg indicated that she believed that the proper approach for ERA supporters, such as herself, would be “a new beginning. I’d like it to start over.” Virginia’s January 2020 adoption of an ERA resolution was, she said, “long after the deadline passed.” If such “a latecomer” were to be recognized, she suggested, “how can you disregard states that said, ‘We’ve changed our minds’?

”Meanwhile, the abortion issue continues to become ever-more prominent in the debate over the ERA. For decades, many ERA advocates engaged in a pretext, denying that the 1972 ERA would reinforce or expand “abortion rights.” Even as late as 2020, some prominent ERA advocates continued to utter such implausible denials. For example, House Speaker Nancy Pelosi, during a February 13, 2020, House debate on the “deadline removal” measure, said, “This [the ERA] has nothing to do with the abortion issue.” Congresswoman Maloney, testifying at a House Judiciary subcommittee hearing on the ERA on April 30, 2019, rebuked Republican panel members for speaking about the strong evidence for the ERA-abortion connection. “The Equal Rights Amendment has absolutely nothing to do with abortion…so please don’t ever say that again,” Maloney scolded.

Yet, on October 13, 2021, it was the ERA Project of Columbia Law School that “[said] that again” – to the Pennsylvania Supreme Court, in a brief urging that court to invalidate a state law prohibiting Medicaid funding of elective abortions. The Center, agreeing with legal claims presented in a lawsuit brought by Planned Parenthood and the Women’s Law Project, argued that such policies limiting access to abortion violate the 1971 Pennsylvania ERA (which is very similar to the 1972 federal proposal) because they have a “disparate impact” on women and “perpetrate illegitimate sex-based stereotypes.” Maloney apparently has high regard for the legal competence of the lawyers associated with the Columbia Law School ERA Project, because on October 6 Maloney sent a letter to the Project’s director, asking for expert legal advice on the status of the ERA. “Perhaps Congresswoman Maloney ought to ask the Columbia Law School attorneys to critique her April 30, 2019 testimony that ‘the Equal Rights Amendment has absolutely nothing to do with abortion,’” Johnson suggested.

Moreover, Maloney, after insisting that the ERA “has absolutely nothing to do with abortion,” hired ERA-activist attorney Kate Kelly as an Oversight Committee counsel. Kelly this year wrote that on abortion, “My hope is that what we could get with the ERA is FAR BETTER than Roe” (capitals in original), and dismissed the 2020 Pelosi abortion disclaimer with the observation, “Speaker Pelosi is not a judge or a Supreme Court Justice.” Kelly also characterized Section 2 of the ERA (“The Congress shall have the power to enforce, by appropriate legislation, the provisions of this article”) as a legal “Trojan Horse” and as “a positive piñata, let’s say, of potential legislation. We get this Equal Rights Amendment, and then there’s all this great candy that we can get inside…. It’s a way to think about it as a much more impactful amendment than maybe folks realize.”

National Right to Life has opposed the 1972 ERA since the early 1980s because it was already then clear that the open-ended 1972 ERA language likely would be employed as a textual constitutional foundation for judicial rulings that would invalidate virtually any state or federal law or policy that impedes access to abortion, or even that has a “disparate impact” on the availability of abortion, including any restrictions on government funding of elective abortion. While journalists sometimes write that “opponents claim” the ERA would have abortion-protective effects, in fact, many of the strongest affirmations of the ERA-abortion link have come from leading abortion-rights advocates who also support the ERA. For example, NARAL Pro-Choice America asserted that “the ERA would reinforce the constitutional right to abortion… [it] would require judges to strike down anti-abortion laws…” A National Organization for Women factsheet on the ERA states that “…an ERA — properly interpreted — could negate the hundreds of laws that have been passed restricting access to abortion care…”  The ACLU, in a March 16, 2021 letter to the House of Representatives, said that the ERA “could provide an additional layer of protection against restrictions on abortion…[it] could be an additional tool against further erosion of reproductive freedom…”  A collection of such footnoted quotes from leaders and attorneys associated with prominent abortion-rights organizations is found here.

Douglas Johnson, director of the National Right to Life ERA Project, is NRLC’s subject matter expert on the Equal Rights Amendment, an issue on which he has written and worked for 40 years. Mr. Johnson is available for telephone interviews or email exchanges to discuss the congressional and ratification histories of the ERA, to comment on the legal and political aspects of the issue, and to discuss the ERA-abortion connection.

@ERANoShortcuts is a non-NRL but recommended Twitter account dedicated exclusively to tracking ERA-related legal and political developments in the courts, Congress, Executive Branch, and state legislatures, from an “ERA-skeptical” perspective.

Founded in 1968, the National Right to Life Committee (NRLC), the federation of affiliates in each of the 50 states and the District of Columbia and more than 3,000 local chapters, is the nation’s oldest and largest grassroots pro-life organization. Recognized as the flagship of the pro-life movement, NRLC works through legislation and education to protect innocent human life from abortion, infanticide, assisted suicide, and euthanasia.