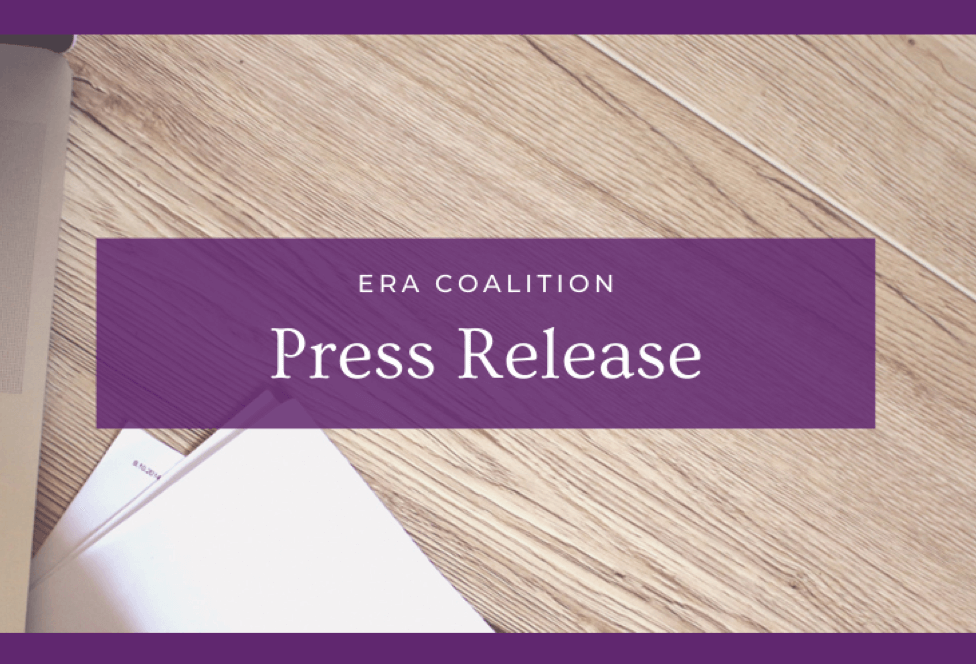 Current claims by Equal Rights Amendment backers: ERA takes effect on January 27; we are close to victory in our long struggle for the ERA.Reality: ERA continued to suffer big federal court losses in 2021, extending a 40-year losing streak in the federal courts; the unconstitutional ERA-revival bill is virtually dead in the Senate; ERA backers are urging Executive Branch officials to ignore federal court rulings and say ERA was ratified.

WASHINGTON (January 20, 2022)– Backers of the long-expired 1972 Equal Rights Amendment (ERA) are energetically peddling a politically useful but grossly misleading narrative to the news media: They claim that the ERA achieved ratification on January 27, 2020, and that it becomes enforceable on January 27, 2022, which they will mark with a wave of new ERA-based lawsuits around the country. They also make much of legislation (pending, but doomed) that, they insist, would “remove” the ratification deadline that Congress included in the original 1972 ERA resolution. Even without such congressional action, ERA backers are urging the President, the attorney general, and the Archivist of the U.S. to take actions to assert that the ERA is now part of the Constitution–thereby ignoring federal court rulings.

“ERA backers have mounted an assault on the integrity of the constitutional amendment process itself, but they are unlikely to succeed,” said Douglas Johnson, director of NRLC’s ERA Project. “In 40 years, not a single federal judge has accepted a single element of the legal claims made by ERA-revival litigants, while 26 federal judges have rebuffed them. In 2021, federal district Judge Rudolph Contreras, appointed by President Obama, ruled that the ERA ratification deadline was valid and that it would have been ‘absurd’ for the Archivist of the U.S. to ignore the fact that the ERA expired decades before actions by the Nevada, Illinois, and Virginia legislatures.”

Bloomberg Law reported on December 28, 2021: “Viewing the [ERA] as ripe for enforcement [as of January 27, 2022], its supporters are preparing to file lawsuits that challenge various local, state, and federal policies as unconstitutional because of their unequal treatment of people on the basis of sex. ‘One thing that litigation will explore and demonstrate is the kind of protections that the ERA will provide,’ said Linda Coberly, attorney at Winston & Strawn LLP in Chicago and chair of the ERA Coalition’s legal task force.” Leading pro-ERA and pro-abortion advocacy groups now openly acknowledge that they read the ERA’s “protections” to include invalidation of limitations on abortion and requirements for government funding of elective abortion.Here are some other facts that run counter to the ERA-revivalists’ concocted cusp-of-victory narrative:

● A resolution passed on a near-party-line vote (simple majority, not two-thirds) by the House of Representatives on March 17, 2021, that purports to retroactively “remove” the ERA’s ratification deadline, cannot pass the U.S. Senate. Despite bold predictions early in the Congress, ERA backers have failed to expand Republican support beyond the two Republican senators (Murkowski of Alaska and Collins of Maine) who have backed such a measure for years. “The measure is manifestly unconstitutional—its premise is that it is possible to amend the Constitution with bait-and-switch tactics executed across generations, without a single Congress ever agreeing, by the required two-thirds votes, on the same legislative proposal,” commented NRLC’s Johnson. Even some prominent ERA backers can’t swallow it—for example, Wendy Murphy, the chief lawyer affiliated with Equal Means Equal, said, “As a matter of constitutional power, Congress cannot affect a law that no longer exists because it expired. You can’t just go fix something that doesn’t exist anymore.”

● ERA-advocacy groups such as the ERA Coalition, Equal Means Equal, and the Columbia Law School ERA Project, and ERA backers in Congress such as House Oversight & Reform Committee Chairwoman Carolyn Maloney (D-NY), have been urging the President, Attorney General Merrick Garland, and/or the Archivist of the U.S. to take actions to affirm that the ERA is now part of the Constitution, or can be made so by majority votes in Congress. They are, in effect, urging officials of the Executive Branch to ignore federal court rulings that the ERA has not been ratified. When questioned about the Justice Department’s posture on the ERA at his June 23, 2021 confirmation hearing before the Senate Judiciary Committee, Christopher Schroeder, later confirmed as head of the Office of Legal Counsel at the Department of Justice, said, “I think we will be all best suited if we allow the litigation process to answer that question.” Garland himself said that he had accepted the position of attorney general only after receiving the President’s assurance that the White House would not dictate legal positions to the Justice Department, a commitment that the President publicly reiterated. Prior to his confirmation, Garland specifically assured senators that with respect to the ERA, “any opinions or legal advice I might give on this subject would be based solely on the law, and not on any other consideration.” The National Archives has not withdrawn its January, 2020 statement that it will not certify the ERA as part of the Constitution unless “otherwise directed by a final court order,” nor at this writing has the Justice Department’s Office of Legal Counsel withdrawn its January 6, 2020 opinion holding that the 1972 Equal Rights Amendment expired on March 22, 1979, and cannot be revived by Congress, except by re-starting the entire constitutional amendment process.

● On February 10, 2020, in remarks at Georgetown University Law Center, the late Justice Ruth Bader Ginsburg indicated that she believed that the proper approach for ERA supporters, such as herself, would be “a new beginning. I’d like it to start over.” Virginia’s January 2020 adoption of an ERA resolution was, she said, “long after the deadline passed.” If such “a latecomer” were to be recognized, she suggested, “how can you disregard states that said, ‘We’ve changed our minds’?”

● Because four states rescinded their ERA ratifications before the March 22, 1979 deadline, groups that claim the ERA was ratified by 38 states now also insist that rescissions are never allowed under Article V (because otherwise, there would not be 38 states even with the three late-comers). While the validity of rescissions is a somewhat unsettled constitutional question, if the ERA backers are correct that rescissions are not allowed under Article V, then at least 8 states that rescinded resolutions calling for an Article V constitutional convention (including Virginia and Nevada) should still be counted as on record as calling for a constitutional convention. “If rescissions to the ERA do not count, then this implies that rescissions do not count for resolutions calling for a Constitutional Convention to pass a balanced budget amendment (or other stated purposes),” warned the senior vice president for government affairs for the liberal Center on Budget and Policy Priorities in a 2020 email to a group of House Democratic staff persons, which later leaked along with documents from several other liberal groups expressing similar concerns.

● The abortion issue continues to become ever-more prominent in the debate over the ERA. For decades, many ERA advocates denied or deflected pro-life concerns that the ERA would reinforce or expand “abortion rights.” Even as late as 2020, some prominent ERA advocates continued to utter such implausible denials. For example, House Speaker Nancy Pelosi, during a February 13, 2020 House debate on the “deadline removal” measure, said, “This [the ERA] has nothing to do with the abortion issue.” Congresswoman Maloney, testifying at a House Judiciary subcommittee hearing on the ERA on April 30, 2019, rebuked Republican panel members for pointing to the strong evidence for an ERA-abortion connection. “The Equal Rights Amendment has absolutely nothing to do with abortion…so please don’t ever say that again,” Maloney scolded. But increasingly in recent years, prominent ERA advocates have cast off this pretext, and it has now been almost entirely abandoned. At an October 21, 2021 hearing to promote ERA, chaired by Congresswoman Maloney in the House Oversight & Reform Committee, pro-ERA committee members and witnesses went out of their way to underscore their belief that the ERA could preserve federal constitutional “abortion rights.”

● In substantial part because of the growing realization of the ERA’s likely application as a pro-abortion legal weapon, support for the ERA has dropped precipitously in Congress since it was approved in 1971-1972. The House of Representatives has voted five times on ERA-related measures over that 50-year period, with overall support among House members dropping from 94% to 52% (far short of the constitutionally required two-thirds margin), and support among Republican members dropping from 92% to 2%.

● Some commentators skeptical of the ERA argue merely that it would be mostly redundant, given developments in constitutional case law and statutory law over the past 50 years. This is erroneous. As discussed in the preceding paragraph, the ERA would likely have a major impact on laws and policies pertaining to abortion. Moreover, prominent ERA backers inside and outside of Congress also believe that the ERA would result in far-reaching changes in other areas of law. For example, Kate Kelly, a longtime pro-ERA attorney-activist and currently counsel to the House Oversight & Reform Committee, on March 31, 2021 described Section 2 of the ERA (“The Congress shall have the power to enforce, by appropriate legislation, the provisions of this article”) as a legal “Trojan Horse” and as “a positive piñata, let’s say, of potential legislation. We get this Equal Rights Amendment, and then there’s all this great candy that we can get inside…. It’s a way to think about it as a much more impactful amendment than maybe folks realize.”

Douglas Johnson, director of the National Right to Life ERA Project, is NRLC’s subject matter expert on the Equal Rights Amendment, an issue on which he has worked directly, and written, for 40 years. Mr. Johnson is available for telephone interviews or email exchanges to discuss the congressional and ratification histories of the ERA, to comment on the legal and political aspects of the issue, and to discuss the ERA-abortion connection.

@ERANoShortcuts is a non-NRL but recommended Twitter account dedicated exclusively to tracking ERA-related legal and political developments in the courts, Congress, Executive Branch, and state legislatures, from an “ERA-skeptical” perspective. Founded in 1968, the National Right to Life Committee (NRLC), the federation of affiliates in each of the 50 states and the District of Columbia and more than 3,000 local chapters, is the nation’s oldest and largest grassroots pro-life organization. Recognized as the flagship of the pro-life movement, NRLC works through legislation and education to protect innocent human life from abortion, infanticide, assisted suicide and euthanasia.